Take a trip down memory lane or journey along a road to new discoveries with a self-guided campus tour!

We have a campus map for you to download and some suggestions for must-see spots along your tour. 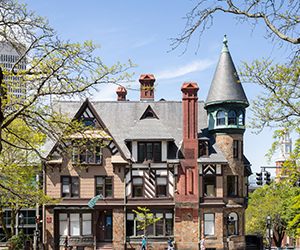 This Queen Anne-style house was built in 1885 by Edward I. Nickerson. The building was purchased by RISD in 1916 and has served a variety of roles for the school, most recently as a student cafe named Carr Haus. In 1973 it was saved from demolition by Professor Michael Fink and added to the National Register of Historic Places.

Class memories:
The 1960s: Just a block over from Waterman, some 1960s grads might remember ‘“yarting' down the hill on Angel Street in the winter when they hadn’t plowed it well. Trays were borrowed from the Refectory for this sport, not for the faint of heart.” —Christy Bradley Colebank 70 IL

The 1970s: Carr House was home to painting studios and was where David Byrne HD 21 and Chris Frantz 74 PT DFA 15 wrote some of their earliest songs as the Artistics (a precursor to the Talking Heads).

The 1980s: “The front window of Carr Haus: In those days, the only indoor space for students to gather in an intimate setting was Carr Haus. The refectory was for freshmen and large gatherings—not set up for comfort. The Carr Haus front window was a coveted seat. I'd sit there for hours on a Sunday afternoon watching the world go by while sketching and writing.” —Peter D. Reid 85 GD 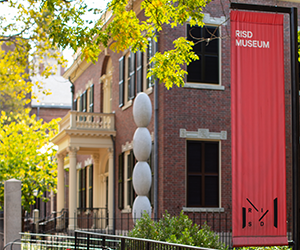 Established in 1877 as part of a vibrant creative community, the RISD Museum, stewards works of art representing diverse cultures from ancient times to the present. Since its founding, the museum's collection has continued to grow and currently contains more than 100,000 works of art and design dating from ancient times to today. Of these objects, 2,207 of them are on view in the museum now. 82,749 of them are available online. There are 753 recent acquisitions. 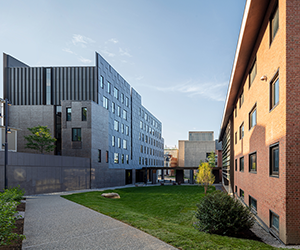 The first-year dorms, collectively referred to as The Quad: East (built 1985), Homer (1957), Nickerson (1957), North (2019), and South (1985) Halls. In addition to the residence halls, this area also houses Public Safety, the Fitness Center, the Residence Life office, and RISD’s main all-you-can-eat dining facility, The Met (aka the Metcalf Refectory). In 2017, RISD worked with NADAAA, a Boston-based architecture and urban design firm led by principal designer Nader Tehrani BArch 86 in order to create a master plan for the Quad and build North Hall. 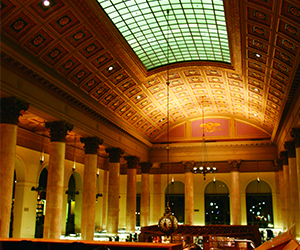 Housed in the former Rhode Island Hospital Trust Building, an eleven-story steel-frame building, faced mostly in limestone, with marble at the lowest level. It was designed by the New York City firm of York & Sawyer and built in 1917–1919. In 2005, RISD purchased the building and it now houses the Mandle Center for Living and Learning—RISD's Fleet Library, Portfolio Cafe, and several floors of dormitory space.

With a circulating collection of more than 150,000 books, RISD’s library offers excellent resources in art, design, architecture and more. Here you’ll also find a Materials Resource Center, many artist’s books and other items of interest to artists and designers. 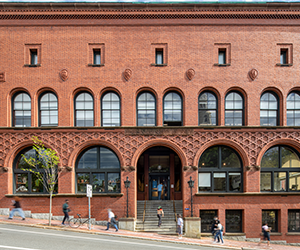 Where: Waterman Building at 13 Waterman Street

In 1937 RISD faculty member and alumni, Edna Lawrence, founded the Nature Lab to “open students’ eyes to the marvels of beauty in nature...of forms, space, color, texture, design and structure.” Today, the Nature Lab continues to offer unmediated access to authentic natural history specimens, while also fostering creative inquiry into biodesign, ecology, and the climate crisis. High-end microscopes, high-speed cameras, and other advanced imaging systems give members of the RISD community access to living and non-living specimens at multiple scales and provide an engaging platform for examining myriad connections between artistic and scientific study.

Class memories:
The 1980s: “The Nature Lab was just a cool place that we were inseparable during freshman foundations.”—Barbara Voccola 86 GD MAT 94

The 1990s: “Nature Lab is a huge part of the freshman curriculum, and so is the Waterman Building.”—William B. Guy 95 ID

This historic mansion was designed by Richard Upjohn and built in 1860 for Dr. and Mrs. Marshall Woods. It is the largest surviving 19th-century house in Providence and currently houses the Admissions Office for RISD and The Woods-Gerry Gallery.

The Woods-Gerry Gallery located on the first floor is the primary exhibition space for undergraduates. The fall and winter exhibit schedule showcases departmental exhibitions and the spring semester has senior exhibitions that rotate weekly. Guests can view the work in the gallery and take in a view of the changing Providence skyline.

The 1980s: “Student Gallery openings at Woods-Gerry. As students, we were always starving. Anytime there was a show opening, there was free food. We'd take a bag and fill up with cheese, fruit, and charcuterie.” —Peter D. Reid 85 GD

Not far from Woods-Gerry is Prospect Park. “A short few blocks from campus, we were sent there often as freshmen to draw. At that time, it was a clear view of the capital with no obstructions. We could see the curve of the Earth. I remember a drawing of the Roger Williams statue. He had an outstretched hand. I drew in a yo-yo, completely changing the semiotics of the setting.” —Peter D. Reid 85 GD

Do you remember where these places were? Would you recognize them today, in whatever form they have?

Late 1960s
(from Christy Bradley Colebank 70 IL)
I remember making constructions of toothpicks to hold an egg and dropping it from a high place to see if the egg survived.

RISD MC was an active club for those with motorcycles. We rode in a group to races and other events. Once someone with a BMW caught his engine head on a curb and spun around. They painted “(His Name) almost died here” on the curb. Another member was riding up the hill and his girlfriend fell off the back and got “road rash”. (Names withheld to protect the innocent).

There was a room with a pool table someplace…

Flying Kites at “The Farm” and “Jug bands”

1970s
(from Elizabeth K. Dillon 70 IA)
"Oakes on the Hill". This is where we got most of our art supplies: Color aid paper, Special markers and brushes. Most of the things are now found in the 2D store on North Main Street. It was halfway between Benefit and N. Main on Angell Street.

The "cafe": Back in the day, the bookstore was in Memorial Hall. There was a passageway that went between the Memorial Hall and possibly the museum: a set of slippery metal stairways that passed all the way down to the textile building loading dock. Halfway down under the bookstore was a cafe. It was dark and had booths where we ate burgers and ice cream between classes.

RISD had no Phys Ed. Dept.( Although, there was a group of people who used to play basketball in a gym in the Bank Building, Currently the 3D store)

1980s
(from Peter D. Reid 85 GD)
Collins House Parlor: I was a resident of Collins House (outer housing). We had a common room on the 1st floor. In those days, Dynasty was a huge evening TV show. staring Joan Collins. We started a weekly gathering to watch the show and some started to dress as characters. We had a dress cocktail party complete with shoulder pads, high wigs, and flashy jackets.

The mailbox room in Memorial Hall and all of the postings on the bulletin board: for sale, work, services, art openings.

The view of the capital from... everywhere

The RISD library in the College Building. 2 stories, intimate, wood, the smell of old books. Always a quiet place full of discovery.

1990s
(from Patrick Marold 97 ID)
Mailroom: I'm not sure if it even exists anymore, but the mailroom (on the ground floor of the College Building on Benefit st) was a special place to run into most people I did not normally see in class or in the studio.

(from Jill Carney 90 GD)
The Pit - and the pit bathroom stalls that someone wrote "Flush twice, it's a long way to the Refectory" . The courtyard at Fornam and The Silver Truck (various locations) 2020s

2020s
(from Chris P. Villalta MArch 20)
These spots are still alive and kicking so stop by and take a look!

Food spots: For my class, particularly for Architecture and ID alumni, Dave's Coffee is very nostalgic, as well as the Jolly Roger Deli, Wild Colonial Tavern, and for some Cafe La France. When visiting these places, we would get a breath of fresh air after spending hours in the studio, so visiting represented a nice break. This is, of course, aside from being in the Architecture and ID buildings. In BEB, events that opened from the lecture